A library-sponsored group open to everyone ages 18 or older! Take part when and where you want. Our goal is to read a wide variety of books and meet new people! We request that everyone be respectful of other's opinions. Want more information? Email us your questions!

Join us on the 2nd Monday of the month at 6:30 pm for our Open Book Club meetings.. If you can’t commit to every month that’s not a problem—just come when you can!

Take part in the online component of our book club. People who are not able to join in face-to-face meeting times or who just want some more discussion can do so here!

Currently Reading:  The Girl in His Shadow by Audrey Blake

Raised by the eccentric surgeon Dr. Horace Croft after losing her parents to a deadly pandemic, the orphan N 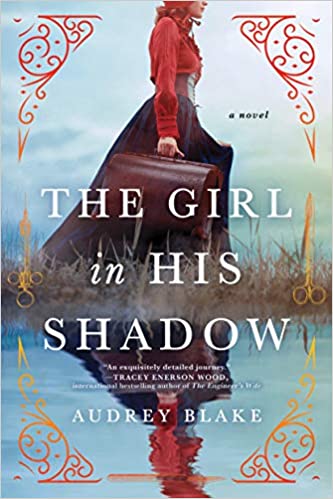 ora Beady knows little about conventional life. While other young ladies were raised to busy themselves with needlework and watercolors, Nora was trained to perfect her suturing and anatomical illustrations of dissections.Women face dire consequences if caught practicing medicine, but in Croft's private clinic Nora is his most trusted--and secret--assistant. That is until the new surgical resident Dr. Daniel Gibson arrives. Dr. Gibson has no idea that Horace's bright and quiet young ward is a surgeon more qualified and ingenuitive than even himself. In order to protect Dr. Croft and his practice from scandal and collapse Nora must learn to play a new and uncomfortable role--that of a proper young lady.But pretense has its limits. Nora cannot turn away and ignore the suffering of patients even if it means giving Gibson the power to ruin everything she's worked for. And when she makes a discovery that could change the field forever, Nora faces an impossible choice. Remain invisible and let the men around her take credit for her work, or let the world see her for what she is--even if it means being destroyed by her own legacy. . Via Goodreads

Next Month: The Vanishing Half by Brit Bennett

The Vignes twin sisters will always be identical. But after growing up together in a small, southern black community and

running away at age sixteen, it's not just the shape of their daily lives that is different as adults, it's everything: their families, their communities, their racial identities. Many years later, one sister lives with her black daughter in the same southern town she once tried to escape. The other passes for white, and her white husband knows nothing of her past. Still, even separated by so many miles and just as many lies, the fates of the twins remain intertwined. What will happen to the next generation, when their own daughters' storylines intersect?

Weaving together multiple strands and generations of this family, from the Deep South to California, from the 1950s to the 1990s, Brit Bennett produces a story that is at once a riveting, emotional family story and a brilliant exploration of the American history of passing. Looking well beyond issues of race, The Vanishing Half considers the lasting influence of the past as it shapes a person's decisions, desires, and expectations, and explores some of the multiple reasons and realms in which people sometimes feel pulled to live as something other than their origins. Via Goodreads

Do you have titles to suggest? Email them to us!